The Cutting of Peat, (Turf) as a Renewable Source of Fuel 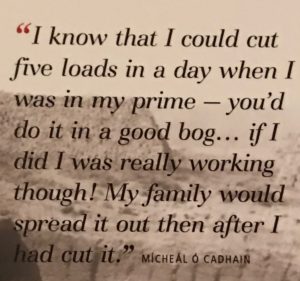 Turf, this word can have many meanings.  Every day we hear the word turf used in a variety of ways. We watch a football game and the announcers discuss the difference between playing on astroturf and natural turf, or maybe they’re discussing a player suffering turf toe?  In horse racing they run on the turf, polo is the game of kings played on turf, inner city gangs protect their turf, and restaurants offer the ever popular special of Surf & Turf.

Merriam-Webster’s definition is thus; Definition of turf. plural turfs \ˈtərfs\ also turves \ˈtərvz\ 1 a: the upper stratum of soil bound by grass and plant roots into a thick mat; also: a piece of this. b: an artificial substitute for this (as on a playing field) c: grass

These are very common uses of the word turf.  Yet in other areas of the world, the word turf takes on another meaning entirely. In the British Isles in general and Ireland specifically, turf is a source of fuel for cooking and heating.  Some would call it peat, for the source of the turf, is from the ancient peat bogs, but the ancient time-worn name is The Turf.  But what is this peculiar stuff they call turf?  Where does it come from and what is the history of the bogs and man’s use of turf for fuel? 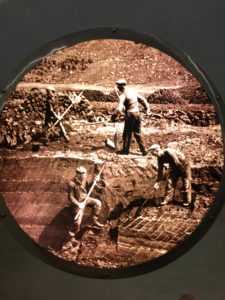 Turf is comprised of layers and layers of partially decomposed vegetation from the peat bogs that over thousands of years has formed layers up to 3 meters/10 feet thick. Bogs make up only 2% of the Earth, yet Ireland itself is comprised of 17% peat bog. That is the second most in Europe. Only Finland possesses more peat bog. Scientists have theories that the peat bogs started to form across great swaths of Northern Europe with shifting weather patterns and climate change thousands of years ago.

At one-time Ireland was heavily forested with hardwood trees. Oak, ash and elm trees covered the island. This is evident by the multitude of bog stumps known as bog oak that is uncovered in the peat bogs. What killed these forest is not known for sure. It’s suspected that Neolithic man cut the trees for timber and to make way for farming. But to clear the whole of Ireland with stone age tools is unlikely. Whatever the cause, as the forest receded the bog plants such as heather, sedges, and sphagnum took over the terrain. Without the trees, the nutrients of the soil were washed away making the composition of the soil more acidic. The increased acidity inhibits the decay of the plant detritus. The increased leaching due to the lack of trees resulted in a buildup of a mineral hardpan layer that further prevented proper drainage, and ergo the decomposition process was decreased even further. 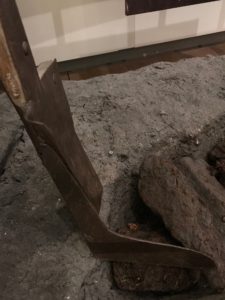 That, in a nutshell, is how the peat bogs formed. They know that once upon a time, Ireland was forested and inhabited with Neolithic farming communities that were well advanced in their farming culture and social structure. The discovery of what is now known as, Céide Fields, really began back in the 1930’s when a local schoolteacher, Patrick Caulfield from Belderrig, often noticed piles of stones in the bottom of the bog when cutting his turf. Eventually by the 1980’s an entire complex of farms, fields, homes, and burial tombs within a grid system of stone walls was mapped out. This entire community that existed 200 generations ago, was found under 10 feet of blanket peat bog.

Can you keep a secret? The peat bogs can. They held the story of Neolithic farmers and their culture.  In more recent times the secrets of bog bodies have been discovered across the peat bogs in Europe. A bog body is a human cadaver that has been naturally mummified in a peat bog. Such bodies, sometimes known as bog people, are both geographically and chronologically widespread, having been dated to between 8000 B.C. and the Second World War. The cutting of turf has been responsible for the majority of these discoveries. They have unearthed the victim of Celtic Druids buried after a ritual murder, an entire burial ship of a Viking King, and last year the remains of a WWII German Focke-Wolfe fighter plane from a Danish peat bog. 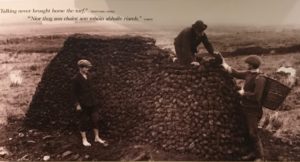 Turf from the peat bogs is the precursor to coal, specifically lignite coal. The cutting of peat (called ‘turf’ when cut) for fuel began in the 17th century and continued at an increasing rate until the mid-20th century. In the past, Irish people heated their homes and cooked their food using turf taken from the bog as fuel. Turf was cut from the bog by hand, using a two-sided spade called a sleán. Entire families often helped to save the turf on the bog once it was cut. Saving the turf involved turning each sod of turf to ensure the sun and wind could help in the drying process. It was then placed upright or ‘footed’ for further drying. Footing the turf was a back-breaking job and involved placing five or six sods of turf upright and leaning against each other. Finally, the turf was brought home and stored in sheds or ricks.  In the Midlands and the West of Ireland, the tradition of using turf or peat as fuel has continued in many homes. The turf is mainly cut by machine nowadays, but saving the turf still involves lots of work and requires good weather. 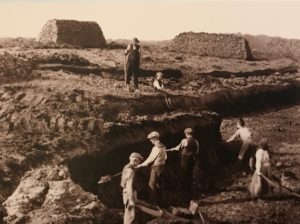 Today as I walked the country road that leads to the house my family will occupy for this next year, I observed this Irish tradition in motion as it has been for hundreds of years now. My neighbor PJ, who farms sheep and cattle up the road rumbled by in a tractor hauling a load of turf in the standard 4x6x10 trailer to a customer. It will heat an Irish home for the coming Winter months. My other neighbor Tony, was loading turf from his pile along the road to haul back to his own farm-house to burn in the stove and hearth.  And myself? I sit by my hearth watching as the flames dance and consume one more piece of The Turf while typing out these pages.  Taking warmth from the site of the dancing flames, I sip my tea smelling the distinctive odor of smoke and say to myself, God is Good.   All the time.

A Story of Sodbuster’s and Living a Simple Life