Skip to content
Visit Page
Home > Life & Living > Tattoos, their meaning and are they biblical?
Published October 13, 2016 by Heather Earles

Tattoos, their meaning and are they biblical?

Tattoos are making a come back in the United States.  Is it just a trend, or are people looking for something to hold onto? Is it both?

People in general are apt to go with a certain trend.  Sometimes more so if it’s on the edgy side.  This gives them a sense of having an adventure, being a bad boy or girl, giving into a dare or in some ways taking a risk.

In these instances listed above I would say it is not the wisest of choices to get a tattoo, because they will probably regret it or the choice of the tattoo will in no way be the right pick.  WHY you may ask.  The simple fact is there is really no meaning to their tattoo other than wanting to feel something through ink.

What does the bible say?  The Bible is and always has been interpreted in different ways concerning tattoos.   There are multiple verses in which people translate it as being okay (Genesis 4:15)  (Song of Solomon 8:6)  “tattoo God’s word on your heart”.  In my opinion God is not speaking about actually tattooing your heart.  He is implying that we should remember, cherish, imprint God’s word on our heart in a way that we will never forget it.  An internal reminder, not an external.

People will also make the argument that they want a reminder of a lost or loved one.  Here is a verse that points to what God says about that (Leviticus 19:28) . Even the marking of a cross or the fish symbol stating the fact you are a Christian.  If we read the Bible God says not to use pagan customs of creating patterns with pagan religious meanings. 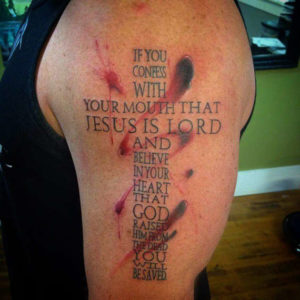 As quoted by: Beyond Today.  It appears to be provable from this verse whether tattooing is forbidden only in terms of particular pagan practice or more generally. For that reason, it seems best for individuals to treat the prohibition as a general one to avoid possible violation here. In doubtful matters, any actions a person takes must be done in full confidence of faith that it’s allowed by God. Even when something is actually acceptable of itself in God’s eyes, if one thinks it might not be permissible and does it anyway, that would be a sin for that person (Romans 14:23).

There is in other words a fine line in marking God’s holy temple (your body) with ink.  We need to look at the heart of the matter and why you think or have decided you should have a tattoo.  Remember God sees the interior and exterior of all.

What about people who already have a tattoo?  If they have tattooed their bodies before understanding or knowing the Lord or even understanding what the Lord says we should accept them and not look down on them.  After all Jesus came that we All might be saved.  I do not believe they need to have their markings removed.  Many people have used their past mistakes to relate and help others.  Again it is all in the heart.  Do not look down on them because of their markings or because they are different.  For all of us have markings of some kind, the difference perhaps is not all are visible.  “Let anyone of you who is without sin throw the first stone at her.” (John 8:7).

I encourage you now to dig deeper and read more scripture that you might understand and make a wise decision based off of facts and not off of a moment you are having.  I have presented some scripture about what the Bible says on getting a tattoo.  This article is not to condemn, but to encourage you to find out for yourself if getting a tattoo is something you should do.  The choice is yours I am merely giving you information on the matter so you can make a wise thought out decision instead of “Hey, let’s go get a tattoo because they look cool.”

I would love to hear your story and why you decided to get a tattoo or decided not to.  Let me know your opinion in the comments section.