Good morning to you wonderful country and city folk.  Today we are learning the art of rendering down pig lard.  Exciting I know.

To get started you need to have butchered a pig and saved the fat.  If you do not butcher yourself, no big deal, just ask the butcher shop to save the fat for you and they will.  Next, I will give you a list of items you will need before starting:

Now that we have the necessary items we can begin.  Start by plugging in your crock-pot and turning it to high.  Some people like to use low so it doesn’t burn or turn the lard brown, but I have never had this happen.  Next, start chopping your fat into chunks as shown below and put them in the crock-pot.  Just to let you know, not all the fat will fit into the crock-pot at one time.  Do not worry about that, I will explain as we go along. 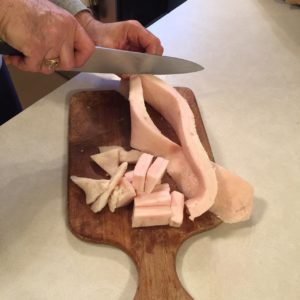 Once the crock-pot is filled and you are able to put the lid back on, you can walk away for a good 2 hours or until the fat starts to break down into liquid lard. 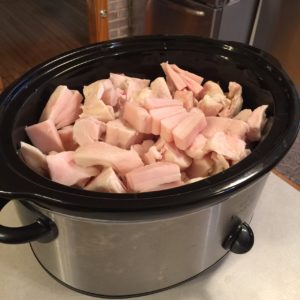 Time to set up your jar with the cheese cloth, a coffee filter or whatever you are choosing to strain the liquid.

As show in the picture below the lard has started to break down and you are able to start scooping the liquid lard from the top and pour it into the jar.  This is the process you will do over and over, replacing the full jar with an empty one as needed.  My husband and I just look in the pot from time to time and scoop as we go about our day.  As you’ve guessed the more you scoop out the more room you now have to add more chopped up fat chunks to the pot. 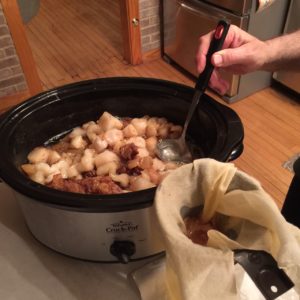 You don’t have to wait for a batch to be done, just keep adding until you have added the last of the chunks.  The amount of fat you get from one pig will take you most of a day to render down.  That is if you start in the morning.  Two days if you start sometime in the afternoon.  We just shut off the crock pot before going to bed, leaving the contents still in the pot and resume again when we wake up in the morning.  In no way does this ruin the rendered lard. 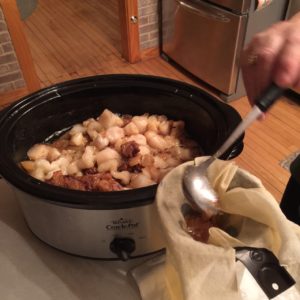 Here is a photo showing a jar half filled with lard as you go through the process. 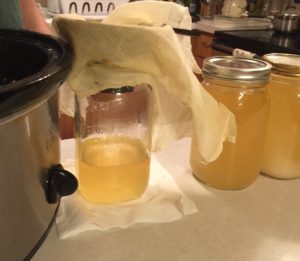 These are different stages of the rendered down lard as it cools.  You can see the color goes from a brown tint to a white.  Once they are all cooled it will look like snow:).  We were able to get 8 quarts and a partial out of one pig. Note: the more you stir the lard while it is cooling in the jar the whiter it will turn out. I use a butter knife to stir. 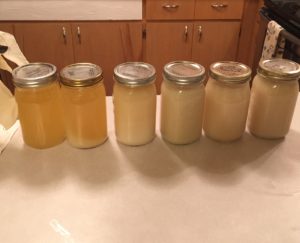 Once you have ladled the last of the liquid out of the crock-pot.  You will see what we call the cracklings left.  They almost look like bacon crumbles.  Some people love to eat these, others give them to their chickens or you can just throw them away.  We had a large cottage cheese container full of cracklings by the time we were done and gave it to a neighbor, who enjoys them. 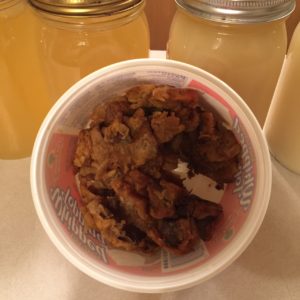 Keep the jars in a cool dark place, the same as you would your other canned goods.  We use the lard for pies, biscuits for anything you would use store-bought lard for.  The flavor of home-made is so much better than store-bought though and your pie crusts will be incredible! 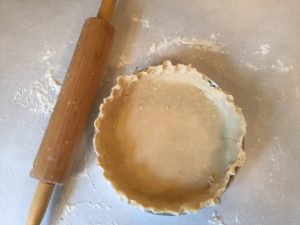 After opening, store the jar in the fridge if it is summer and the house is a little warmer.

Voila,  you now have the skill and knowledge to render down and make lard.

Now, it’s your turn to make your own. If you have any question, please feel free to leave a comment or send me an email: heather@heatherearles.com 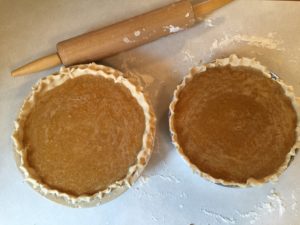