This interview was taken at the L&H Shoe Shop in VALLEY CITY ND. Owners Jill Christensen and Ruth Larson were present.

In 1912 or 1913 a shoe shop was started by Martin Swanson at 125 5th Avenue. The shop was sold in 1924 to John Konen and Konen sold it to Roy Elstrom in 1939. During Elstrom’s ownership, new equipment with modern machinery was purchased and the shop was enlarged. In 1949 Harold Hoff started working for Elstrom. Three years later in 1956, James Larson started working. The two worked together for Elstrom until 1956 when Larson and Hoff purchased the shop from Elstrom and renamed it L&H Shoe Shop. In 1968 or 1969 Larson bought out Hoff’s half.

James, who passed away three years ago, was the husband to Ruth Larson and father to Jill Christensen. The business has been owned by the Larson family with Christensen taking over in 2001. Since the passing of her husband, Ruth Larson continues to take orders and help her daughter in the shop. Christensen who had worked alongside her father and mother since the age of 11 described the connection she has with her family. “We have always been there for each other, we never fight and work well together.” This showed as the interview took place. Each one encouraging and giving compliments. Christensen went to college but returned to work with her father realizing that’s where she wanted to work and was meant to be. 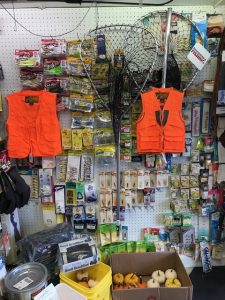 The history of the L&H Shoe Shop was remarkable. As Larson and Christensen showed me around I gained a better understanding and appreciation of what hard work and skill it takes to run a shoe shop. L&H repairs more than just shoes. Other items they listed but are not limited to are canvas, shoes, zipper repair and replacement. They also patch clothing, hem jackets/workwear, repair luggage, purses, baseball mitts, wedding dresses, prom dresses and more. On the retail side, they sell guns, ammo, fishing and hunting supplies, shoe care products, Red Wing shoes, and Tony Lama Boots. As the family partook and enjoyed the sport of hunting and fishing, these supplies are sold in the store.

The equipment dated back to when Elstrom owned the business is still in working condition and very rare. With the long machine in the back called, “The Finisher,” Christensen is able to buff boots and other shoes with rubber and brush rollers. To the left of the finisher sits a “Landis K Shoe Stitchery Machine.” It’s a very rare machine with many working parts. The last time it was repaired the cost was five hundred dollars per hour. The strong needle repairs the lacing around the soles of boots. Towards the front and left of the shop there are two, “Singer Sewing Machines.” One is a long arm and one is a short arm. Originally both ran by a treadle but have since been modernized so they run by electricity through a motor. These repair the majority of items that come into the shop. 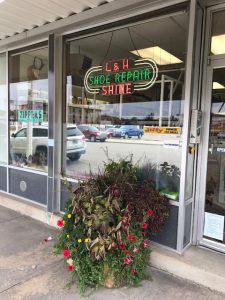 Besides the equipment, the original ceiling tile, which is tin with designs on each tile, is still visible in the back room. Larson explained how she enjoyed looking at it and knowing nothing had changed. This is yet another sign of the authentic and long-standing building. Once there were businesses in the basement and upstairs throughout the building, but over time the small business has become more obsolete as family members don’t want to take over or the economy has prevented them from continuing. The neon light that hangs in the front window of J&H is proof of this. This light came from a business next door in the basement that made neon signs. Now there are no remnants that business ever existed besides the lights in a few businesses left across town.

Preserving history through our small-town shops is the key to keeping America alive and retaining the idea that we as a country can build something from the ground up. 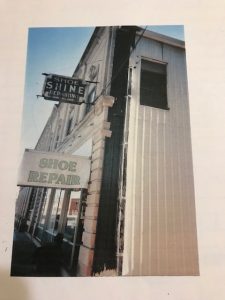 Christensen and Larson mentioned an antique sign which said, “Shoe Shine Repairing.” To their knowledge, the sign has been there since the beginning when Swanson first opened a shoe shop. The sign is around 100 years old and used to light up. They described how it hung above the awning on the corner but was removed in 2018 due to a bolt breaking. “I haven’t decided yet to sell or restore it,” Christensen said. The two have had substantial offers from buyers but realize what a piece of history it is. Not just for their shop but for the town.

Family owned businesses are the core of a small community, and as Christensen stated, “They’re the heart of the local economy.” With the number dropping from 59,000 shoe repair shops nationwide in 1945 to less than 7,000 at present. “This is a dying trade,” Larson said.

During this interview, it was evident that Larson and Christensen took great pride in their store. “A man did an article about our shop and said it was the cleanest shop around,” Larson stated while putting things in their rightful place.

Their attitude about the type of work they sometimes had to do was honest and showed a get it done and positive type of leadership. Looking at each other they said, “When it’s something really hard we say, just get it done, just do it.” I thought this was amazing as our modern culture sometimes says the opposite when it comes to hard work. Doing something that’s difficult consistently is a skill on its own. Looking at Christensen’s hands as she turned them over I could see the callouses and scrapes indicating hard work and long hours. She has the heart and soul of her labor right there where everyone can see. 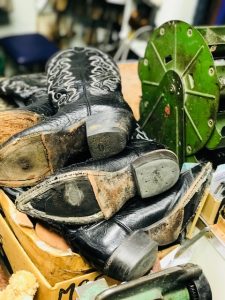 People at times take for granted that a business, a place will always be there. In Christensen’s case with no one else to take over, this vital business will cease to be once she retires. When asking if they planned to apprentice anyone Christensen had a hard time answering. She mentioned, “If you take time to train someone and teach them this skill, they don’t stay. So, all that time I’ve now just waisted. Hiring someone isn’t feasible, so I will work as long as I can.” And that was it, in a couple of sentences a businesses fate can be determined. As a customer, it’s hard to think of this Shoe Shop not existing. The Larson family has invested their entire life and time to this place and our small town.

This is one true story and example of many in small towns across America. Businesses need locals and their support. The families that own them are more than business owners, they are our friends. A community that supports each other grows and prospers.

If you have that little shop or business in your town, why not stop in, say hi and let them know how much you appreciate what they’ve done for your community. You never know, it might be the difference in them keeping their doors open.