Skip to content
Visit Page
Home > Health > Nutrition and Diet > Cinnamon & the Benefits it has For Your Health.
Published November 30, 2017 by Heather Earles

Cinnamon & the Benefits it has For Your Health. 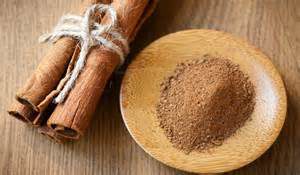 Before beginning my articles, I like to explain from a reliable source, what something is and where it comes from.  Thus, leading to Merriam Webster’s definition below.

The Definition of cinnamon

1a: the aromatic, dried bark of any of several tropical trees (genus Cinnamomum) yielding a culinary spice, oil, and flavoring; especially: a small roll or quill of cinnamon bark

b: the tan to dark brown spice that is prepared from cinnamon bark by powdering and has a somewhat sweet and spicy taste

NOTE: Ceylon cinnamon comes from a tree (Cinnamomum zeylanicum) of Sri Lanka and southern India and is usually considered to be true cinnamon. Chinese cinnamon, Indonesian cinnamon, and Saigon cinnamon come from several related trees and typically comprise most of the less expensive cinnamon spice sold in stores. This spice, also known as cassia, tends to have a stronger, spicier character than true cinnamon.

Knowing now what it is and where it comes from, we can peel back the benefits layer, by layer.  Starting with the basics, we’ll identify the benefits and which part of the cinnamon bark they come from. 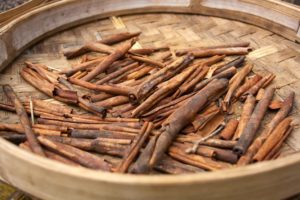 Cinnamon bark is used for gastrointestinal (GI) upset, diarrhea, and gas. It’s also used for stimulating appetite; for infections caused by bacteria and parasitic worms; and for menstrual cramps, the common cold, and the flu (influenza).
Cinnamon Sticks – 1 three-inch Stick Per Day (6g/0.2 oz) – The best way is to boil it into a cinnamon stick tea. That method will ensure good levels of cinnamon as the brewing process with extract all that is good in Cinnamon, especially the essential oils. You can incorporate Cinnamon in other recipes too. Keep it to one stick per day. Each Cinnamon sticks weighs about 5g which is within the daily limit. 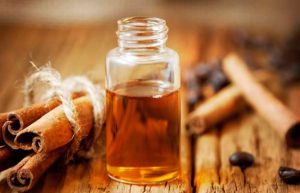 Ceylon Cinnamon Bark Oil – 1-3 drops Per Day. If you want the purest of Cinnamon distilled into an oil with high levels of cinnamaldehyde, then this is what you take. Start with just one drop mixed in 8 oz. of hot water, tea and brewed ginger. Then increase to 2 drops and then 3 drops only if necessary. At just 1 drop it adds a lovely flavor. Anything more depends on your personal needs. This oil is very powerful, hot, spicy and a little sweet. Too much and your blood sugar levels may drop leaving you light-headed and weak. 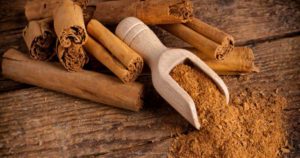 Cinnamon is made by cutting the stems of the Cinnamomum tree. The inner bark is then extracted, and the woody parts removed from it.  When it dries, it forms strips that curl into rolls, called cinnamon sticks. The sticks can be ground to form a powder, Sri Lanka Real Cinnamon

One tablespoon of ground cinnamon contains:

A little bit of cinnamon goes a long way, and its antioxidant abilities are what makes it especially beneficial to include in your diet. As little as 1/2 a teaspoon daily can have positive effects on blood sugar levels, digestion, immunity, and more. However, stronger doses are also extremely beneficial for improving heart disease and cutting your risk for diabetes, cancer, and neurodegenerative diseases.

Whether it’s the holidays or just a normal day, you can add cinnamon to your diet.  Put it in drink form when you have a sore throat or just as a healthy start to your day.  See below for a variety of recipes. 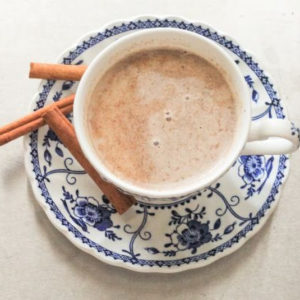 Heat milk on low until hot but not boiling. Stir in the cinnamon and ginger. Add honey to sweeten it.

Recipe from Lavender, Parsley, Peppermint and Sage by Shea Zukowski.

Cinnamon Sore Throat Tea is particularly soothing right before you go to bed at night when your throat hurts so much that you wonder how you’ll sleep through the night. 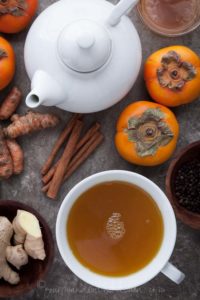 Recipe by Gourmande in the kitchen. 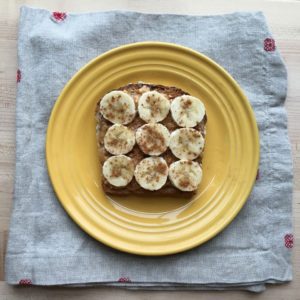 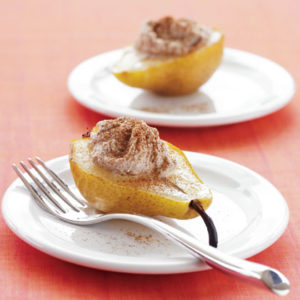 Slice medium pear in half, scoop out seeds and sprinkle cinnamon over the top.  For an extra treat, add a dollop of whipped cream.

Now that you have recipes to get you started, there is no excuse left for not adding this wonder spice to your diet. I will be posting more articles later that focus on certain areas so check for those.

For now, Eat, Drink, and be Merry♥

Mustard-Turmeric and what they have in common