Trials can Make you Stronger

Trials and hardships come to us and more often than we would like in life.  Sometimes they seem to hit all at once and other times they come to us at a rate we can handle.  This is what we think anyways. 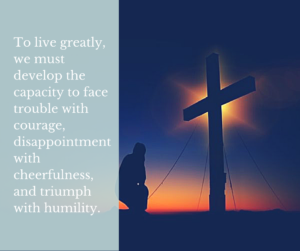 A friend and I were talking and discussing this topic earlier this week.  And why at time a person seems to handle trials or hardships and sometimes they don’t.  The conclusion was simple as we observed and researched human behavior.

When we become out of tune with our intuition, that’s when bad things start to happen.  I believe intuition/conscience is the Holy Spirit telling us right from wrong and giving us a sense of when something bad is about to happen.  Our trials seem harder to handle when we are not in tune and of course when we are not listening altogether unnecessary trials come, period.

I want to note that the death of someone can’t always be prevented.  Whether old age, sickness or something unexpected happens, we couldn’t have changed it.  However, we can decide how we will react from it or move on.

Using my sister as an example of this.  She lost a baby boy before the age of one.  Her little son stopped breathing while lying on the couch next to her.  Performing CPR until the ambulance arrived, there was nothing that could be done.  He had heart failure and that’s what caused him to stop breathing in the first place.  It wasn’t strong enough to continue even when the doctors took over.  Now, my sister could have become depressed not wanting to move on from her little boy’s death, but she didn’t.  She chose to cherish his memory, although still weeping for the loss of her son, she didn’t stop her life.  She had a husband and another son to take care of.  Her mind was strong and in-tuned, giving her a chance to cherish, but also wake up the next morning and begin again.

This is the whole point I want to make.  Our trials seem harder when we are feeling low, out of tune, sick, hurting, suffering from an injury, a loss, you name it.  The trial itself could be the same one that hardly slowed you down when you were feeling good, but since you’re not, it feels as though it’s something you can’t overcome.

This argument can be taken back to the, “Mind Controls Everything.”  It’s not really an argument as it is a fact.  When our minds are performing right, thinking clearly, staying positive and rested then our trials although rather large at times, don’t crush us as they do when we are down.

Mind, Body, Soul.  When we keep these three things healthy and inline our trials and tribulations can be overcome.  You may have to get creative at times, but nothing in life should be so overpowering that you feel you can’t go on.  If this occurs, then you are relying too much on yourself and not enough on Christ.

We have been given giants to help us stand.  Hardships and trials give growth and strength to a person when they are in the right mindset.  Trials are meant to ask something of us. 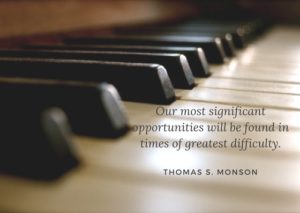 Often, we feel we have let others down when something happens.  We kick ourselves for not learning an earlier lesson, not listening to our intuition, or letting pride pave the road even when it leads to a dead-end.

Although it’s important to learn from our mistakes, you should never wallow in the mud of them.  What you should do is listen more closely the next time that still small voice speaks.  The more you do that, as my amazing friend said.  “The more you will be in tuned to it each time.”  Humans in general think way too much.  If we can’t see it, we doubt.  At the most critical times in life we question when in fact we should be listening.

Humans are the ultimate beings that can adapt and change.  This is good news because that means there is always hope of improving.  Don’t let trials overtake you or bring you down to the point of depression and or feeling life is over.  Remember, there’s always hope in tomorrow.

If someone else has failed, because they have refused to listen to their intuition then be the encourager or the tough friend/spouse that says.  “I love you and forgive you, but you need to listen the next time your intuition/conscience is telling you something.”  Show grace, but don’t make excuses for them.  Saying they did nothing wrong will help no one.

There are many lessons to be learned from the trials of life.  It’s your final decision in the end if you are going to 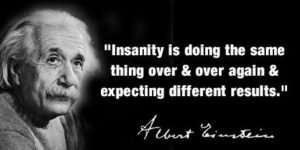 learn from them or keep making them.  Or if you will let something devastating, like a death cripple you for life.  “The definition of insanity is doing the same thing over and over again expecting different results.”  Learn and grow letting your intuition/Holy Spirit guide you.  And always remember there is a light at the end, even when the beginning is dark.

The Power of Forgiveness