Combating the Symptoms of PTSD through Exercise

First I will admit that I have not done any studies between PTSD and Exercise. I will say that as a Retired Green Beret and Gym owner I have seen what Exercise has done for Soldiers combating the symptoms of PTSD.

In 2016 Prior to Retiring I expanded my Supplement Nutrition store from Caliber Nutrition to Caliber Nutrition & Fitness as well as starting my own supplement company called alphaeliteperformance.com I have met a few Adaptive Athletes while competing in the Warrior Games and at an amazing facility called The Adaptive Training Facility located in Dallas TX.  It seemed to be where I was headed with my business.  When I opened my personal training studio I met a man who was obviously suffering from PTSD.  He didn’t seem motivated, had a low self-esteem and admitted that he was diagnosed with PTSD and Depression.  He was still active duty but was being forced out due to changes in the rank structure.  I convinced him to try personal training and to meet one of the trainers I have on staff.  He agreed to do so. 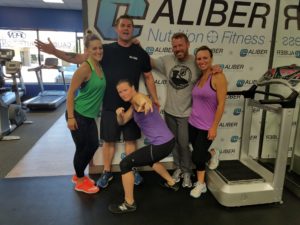 Day one started off with a bunch of talking and getting to know each other.  We told him that regular exercise has an amazing number of benefits that can help with motivation and metabolism.  This in return will help with depression and PTSD.  I was taking a gamble on him but  I know exercise helps my metabolism and makes me happy.  It has contributed to positive physical outcomes and performance in my life.  So why not?  We had him start off with walking and light weight lifting and talked to him about his diet and meal plans.  He stated that his meals consisted of hot pockets and whatever he found in his cupboards.  Very little water and drank diet soda pretty much all day.  This was horrifying to hear but we all know it happens.  We changed that quickly with a meal plan and grocery list.

Week two had passed and he started to look better.  He sounded better and actually had some color.  His cardio improved and he began to see the benefits of exercise.  His flexibility and mobility seemed better and more importantly he started to laugh.  He started to enjoy working out and made it a daily activity.  On days that he didn’t work out with us he still stopped by to say hi.  It was clear that the exercise and friendship was making a positive impact on his mental health and seemed that the daily exercise reduced his depression and increased his metabolism.  It was a success, albeit a small victory, I was very excited!

That’s my short story about a soldier who was depressed and still has what I now call PTS.  I don’t like to call it a disorder any longer.  People may still have PTS but it is treatable.  I’ve dealt with my own issues but always turn to positive things in my life to lift my spirits.  So given the benefits of daily exercise, as well as physical health problems experienced by people with PTS, a daily exercise regime absolutely helps in a number of positive ways for anyone with PTS.