Pushing the Limits of Life 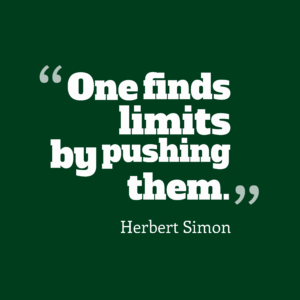 Pushing the limits of anything involves stepping outside of your comfort zone and looking for a diamond in the rough or something nobody else can see.

Looking out the window of the airplane I see the vastness of the world below but someone invented planes to conquer that vastness.  Now instead of it being an object, we can’t overcome, the limits have been pushed to the point of me sitting on a plane, flying to wherever I want to go in the world.

Our mind is the only thing that puts limits on where we can go in life.  When we take control of our mind we can now push those limits as far as we are able to think and dream.  Is it scary?  Yes.  Anything new and big usually is.  We don’t give up because it’s scary though.  We press on, have courage, we fight for what we want. 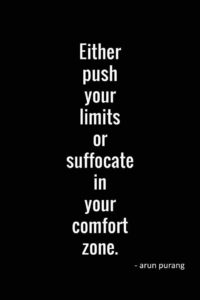 Pushing limits will mean losing friends at times or having people get mad at you.  People are always afraid of something new or a change they don’t understand.  You need a strong purpose or backbone if you are to succeed in pushing the limits of something worthwhile.

There is a light, however.  Pushing limits will also put you in a caliber of new people who want to go somewhere in life and perhaps have already achieved great goals.  These people understand what it takes and the pains that come along with striving for what you want.  The class or type of people who won’t try to pull you down but tell you to keep pushing through the obstacles are the people and types of friends you should have.

Create a circle of friends that add to you and where you want to go in life.  Positive thinkers, movers, shakers, life changers and believers.  The ones you look up to and admire should be the ones you have in your circle. 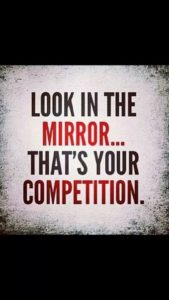 Pushing the limits of life include the body as a whole.  Health mental and physical is needed to take you on your journey.  It’s not about outdoing someone, but controlling yourself so you can move past yourself and the non-belief that will try to creep in.  Be more than a thought, think big.  After you have done that you need to put your thoughts into action so you can move forward.  Dreams don’t come true lying in bed.

Do you want to push limits, to be someone who will make a difference?   If so then put yourself in the driver’s seat, buckle up and hold on for the ride no matter how bumpy or scary it gets.

Here’s to you and your journey.